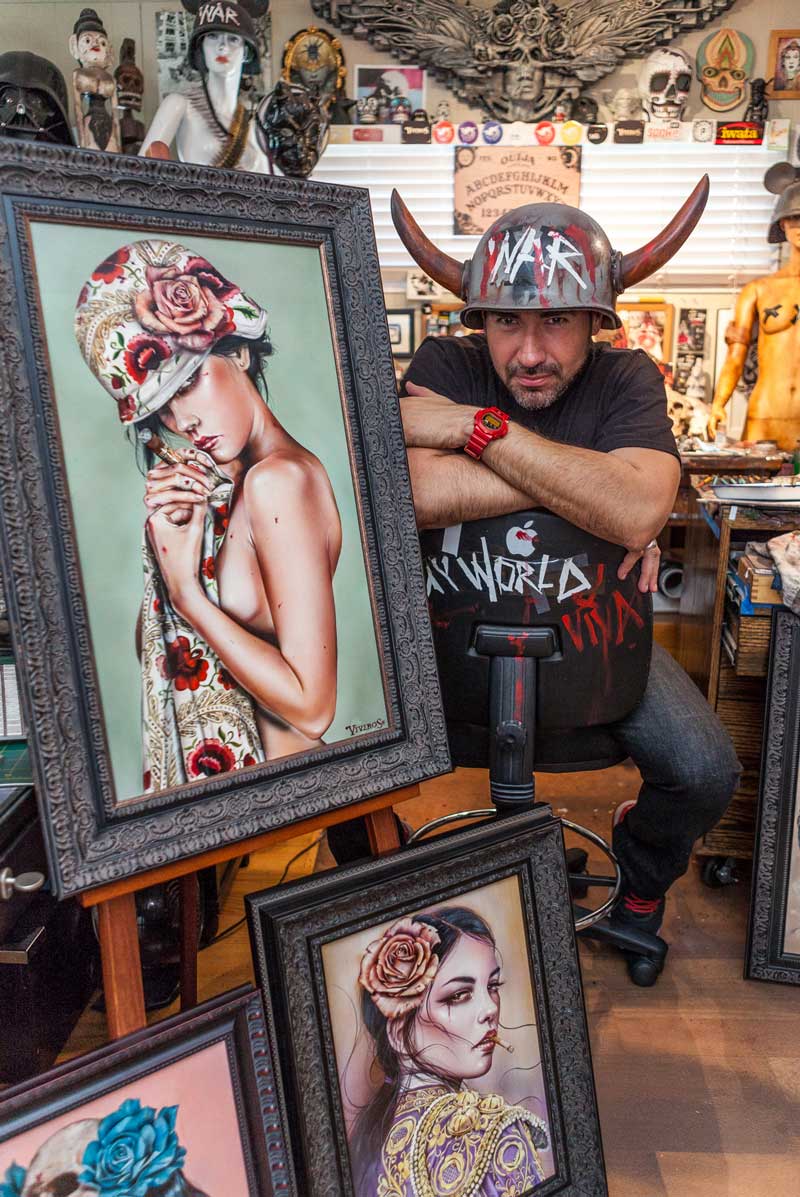 Internationally celebrated artist Brian M. Viveros has an unmistakably arresting hand. His highly detailed paintings of defiant doe-eyed beauties summon a raw poetic of intractability. Beautiful and yet barbarous, they draw from the power of the feminine and its reconciliation of vulnerability, beauty, and power. His subjects are fighters and survivors, rendered immaculately, and just bloodied enough to remind us that they are formidable opponents not to be taken lightly. The artist’s hyperreal portraits deliver cult worthy heroines emerging triumphant from battle, complete with cigarettes anchored from parted lips, and tattoos and wounds to rival any soldier’s; they are steel tough victors rendered with something of the sublime. Viveros’ work elevates the iconography of the femme-fatale as a powerful emblem of strength and retaliation: insubordinate beauties undaunted by the unruliness of a messy fight.

A technical perfectionist, Brian Viveros’ oil, airbrush, acrylic, and ink paintings are highly saturated with pigment, luminosity, and depth, while the compositions are poignant and simple. The artist’s emphasis tends to be on focal points such as the eyes, lips, and skin, conveying the subtlety of minute expression and the power of an impaling gaze. The paintings feel cinematic, like haunting stills from a film, owing to their evocative suggestion of narrative and to the iconicity of their subjects. The artist’s creative cosmos is beautifully stylized, never derivative, and distinctly recognizable as his own.

In addition to his painting, Brian M. Viveros has extended his practice to include film. His feature short Dislandia, marked his debut as a filmmaker in 2005, and explores the desolate dreamlike world of an unsettling young girl. The surreal psychodrama is replete with imagery from the bizarre to the symbolic, and explores a quietly eerie eroticism. Similarly, Southern 2008, Viveros’ first full length surreal film, is a highly stylized exploration of primordial impulses, troubling eroticism, and violence. The artist and the Dislandic crew were featured in a behind the scenes look at the making of the film on the Sundance Channel’s ‘Pleasure for Sale’, a feature that ultimately informed the making of Southern. Other recent films include: Tercio De Muerte, and Lesser Eleusinian Mysteries. Viveros’ filmic work, much like his painting, captures something powerfully uncanny and symbolically unsettling from the depths of our strained psyches, and yet keep us entranced by an undeniably seductive urge to keep looking.

All Artwork Copyright Brian M. Viveros (2007-2017). No Reproduction Without Permission, All Rights Reserved.